Applications closedFinding a Job and Building a Career in Japan
Applications for this course are no longer accepted.

Business Japanese is not only a matter of language. It is also a matter of how you create your own future career using Japanese. In this lecture, we will talk about career planning for international students based on the current status of job hunting in Japan. 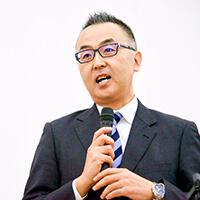 Mr. Sugano graduated from Hosei University, faculty of Business Administration in 1987. He has consistently been engaged in the human resource business, including new graduates, mid-career recruits, and temporary employment. His team opened several job websites for doctors, pharmacists , starting with "Nikkei Career Net",  operated by Nikkei Inc. Since 2013, with the help of Nihon Keizai Shimbun, Inc., he has held the "NIKKEI ASIAN RECRUITING FORUM IN TOKYO", which connects students who are studying at major universities in Asian countries with global companies in Japan. So far, more than 200 foreign university students have found jobs in Japan. He also gives a lecture on employment support for Japanese and foreign students.

* Membership registration is required to apply.
* Various payment methods are available. About payment method
* The "Attend" button (link to the meeting URL) will be activated on the course opening day. To access, you need to log in to your member page. If you can't find the "Attend" button, check if you're logged in.
* Please make sure to read "how to attend online" by the day of the course, and access the "Attend" button after preparation of the necessary settings. If there is a deficiency in the setting, certificates may not be issued. Please access well in advance to access.
* Preliminary materials, lecture materials, and lecture videos may not be available.
* The viewing deadline for lecture materials and videos is 7 days including the date on which they became available for viewing. (*It will be available within 7 days from the course date.)
* In order to attend the course, you need to answer the pre-questionnaire. To view the materials on the day, you need to complete both the pre-questionnaire and the post-attendance questionnaire. The deadline for answering the post-attendance questionnaire is 7 days, including the day of the lecture.

TargetTarget: International students or employees who have passed JLPT N2 or above.
* Non Toyo University students can also take this course.
* Participation from abroad is highly welcomed.