Applications closedBusiness Japanese Listening Comprehension
Applications for this course are no longer accepted.

No matter what your job is, understanding what people are saying is an absolute must. The lecture is an opportunity to learn more about listening comprehension in Japanese business situations and improve your skills. 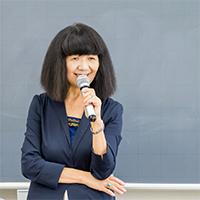 Upon graduation from the English Department of the Faculty of Arts and Letters at Aoyama Gakuin University, worked for the Tokyo Branch of Deutsche Bank and a Japanese company operating in Basra (Iraq), before taking up Japanese language education. Master of Arts. Professor at Musashino University and consecutive Head of the Postgraduate Department of Language and Culture and the Department of Japanese Language Communication. Chairperson of the Japanese OPI Study Group, Secretary of the Academic Japanese Group, Representative Director of the Society for Business Japanese Research, Member of the "Research Committee for the Promotion of Employment of Foreign Students by Japanese Companies" and the "Committee for the Development of a Common Curriculum for Staff from Asian Countries" under the Ministry of Economy, Trade and Industry, and in charge of the Japanese language course for the "Foreigners Living in Japan" Program under the Agency for Cultural Affairs. One of the pioneers of both research and teaching of Business Japanese, who has actively promoted its newest theories and practice both in Japan and abroad.

* Membership registration is required to apply.
* The payment method is a credit card.
* The "Attend" button (link to the meeting URL) will be activated on the course opening day. To access, you need to log in to your member page. If you can't find the "Attend" button, check if you're logged in.
* Please make sure to read "how to attend online" by the day of the course, and access the "Attend" button after preparation of the necessary settings. If there is a deficiency in the setting, certificates may not be issued. Please access well in advance to access.
* Preliminary materials, lecture materials, and lecture videos may not be available.
* The viewing deadline for lecture materials and videos is 7 days including the date on which they became available for viewing. (*It will be available within 7 days from the course date.)
* In order to attend the course, you need to answer the pre-questionnaire. To view the materials on the day, you need to complete both the pre-questionnaire and the post-attendance questionnaire. The deadline for answering the post-attendance questionnaire is 7 days, including the day of the lecture.

TargetTarget: International students or employees who have passed JLPT N2 or above.
* Non Toyo University students can also take this course.
* Participation from abroad is highly welcomed.